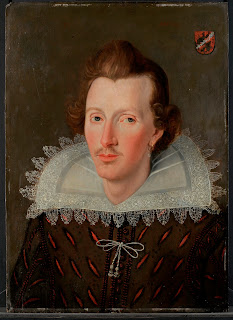 For the last couple of years, I’ve been involved with my client Steve Wadlow in his quest to determine whether his family owns what could be the only known proven lifetime portrait of Shakespeare.  It would be particularly topical in this the fourth centenary of the bard's death.
It’s an amazing story of an unregarded old portrait hanging in the living room of a modest family home.  It was near the television, and one day a programme about Shakespeare showed an image that seemed strangely familiar!  Steve gives the full story on his fascinating new website.
Although his father was involved in antiques, Steve had not been involved in the art world.  He has since put a great deal of time and effort into investigating the portrait and trying to generate expert interest.  In one sense he has been successful in attracting the attention of connoisseurs and in arranging technical examination, but it has also been a story of frustration, which Steve discusses openly on his website.  The irony is that the frustration is not from adverse responses; quite the opposite, as on balance the responses and research are positive and encouraging.  The problem is in getting backing for the necessary further technical exploration and some respected endorsement.   These days, and as discussed elsewhere on this blog, experts and connoisseurs are very reluctant to commit themselves.  Understandable as that may be, it is not conducive to greater scholarship and new discoveries which could benefit historians and art lovers.
If you have any views or ideas for Steve Wadlow, I'm sure he'd be glad to hear from you.